Forum for the discussion of other Teams and Clubs as well as General Rugby chat. 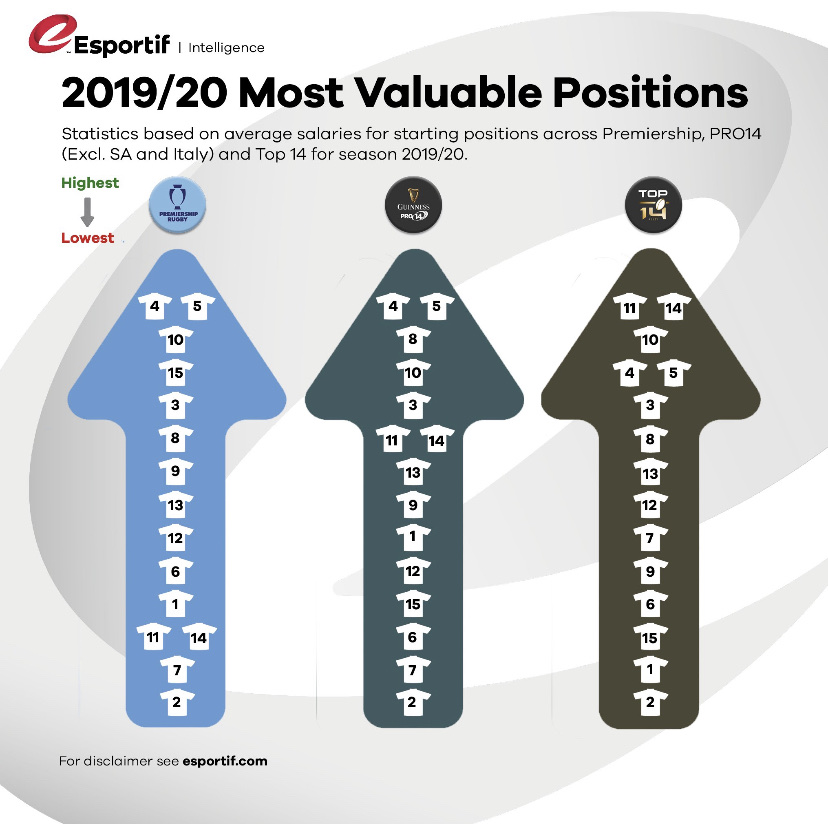 Not sure what the best thread for this is but here ya go. Salaries by position in the three leagues
Top

Interesting that 2nd rows have moved on.
Top

Not sure what the best thread for this is but here ya go. Salaries by position in the three leagues

Interesting! I thought that conventional wisdom/ scuttlebutt had it that the 10 and 3 were the best earners on average. But second rows and wingers- there ye go...

It was props a few years ago alright but it appears the disappearnace of Penaud Traille from the score sheet has seen there value dissiapte. In fact you're more likely to score a PT off lineout maul nowadays. Maybe it takes a while for that to filter thru in terms of wages.

paddyor wrote:It was props a few years ago alright but it appears the disappearnace of Penaud Traille from the score sheet has seen there value dissiapte. In fact you're more likely to score a PT off lineout maul nowadays. Maybe it takes a while for that to filter thru in terms of wages.

Tight heads aren’t in as short supply as a few years ago. There are a fair few really really good locks around to drive average up but they are still in demand.

Also this is a different question statistically. e.g. starting out halves in Ireland. Sexton is probably the top paid player overall. The others are Carbery, Carty and Burns. So nothing special salary wise so the average is high but maybe not the highest paid.

The most interesting difference is wings/fullbacks in different leagues. The English love their fullbacks (and have for years), the French buy star wingers.
Top

Hookers and sevens look like good value, if you can get a durable one.
Top

It makes sense from a supply and demand point of view.


In the pro14 there are not many foreign players allowed so we need to rely more producing local talent compared to France especially with England somewhere in between. No surprise then that the rarest athletes (locks) are the highest paid. The French clubs import locks from all over the world so their supply is greater.


Hookers and 7s tend to be closer in build to the average man so there's more supply there.


What was surprising on first viewing was loose head prop being near the bottom in the top14 but when you think of it, they've been flooded with props from Georgia, SA and the Pacific islands in recent years.


It also looks like English clubs see their fullbacks as second playmakers more than the pro14 and top14.
Top

Or just how long they have to last in the game to become elite in physique and experience.
Top

Very interesting Table and, if it represents more that just recent high-profile movements of 2nd Rows, it is perhaps indicative of a changing pattern of where the most tactically influential players are now found.

In that regard, it is also informative to see the uniformity in the positions of No 10's, 3's and 8's. All still considered vital in all three Leagues.
Top

They are also the positions with the rarest body shapes and sizes at elite level.
Top

neiliog93 wrote:It's supply and demand. The number of guys who are 6'6"+, and very well built, and very athletic, is low. How many genuinely big, mean, athletic second rows are out there now - maybe Etzebeth, de Jager, Snyman, Retallick, Skelton, Lavinini, Vahamahina? That's about it.

neiliog93 wrote:It's supply and demand. The number of guys who are 6'6"+, and very well built, and very athletic, is low. How many genuinely big, mean, athletic second rows are out there now - maybe Etzebeth, de Jager, Snyman, Retallick, Skelton, Lavinini, Vahamahina? That's about it.

He's not that big but he is highly athletic for a big man. Itoge too.
Top

blockhead wrote:Not exactly the right thread for this and it is from last october but some good numbers in this rugbpass article.

With the Gallagher Premiership beginning this weekend and the Guinness PRO14 moving into its fourth round later this mongth, Esportif Intelligence have released their annual ‘European Rugby by Numbers’ review focusing on the financial strength and squad management of the clubs in both competitions.

RugbyPass have delved into the report and found some of the highlights that make for very interesting reading as the 2019/20 European club season gets fully underway.

In terms of average attendance, the Premiership’s 14,000 average outstripped the PRO14’s 9,200 last season, although those figures were much closer when comparing the top four sides in each competition with the PRO14’s 12,900 much closer to the Premiership’s 13,5000. The report notes that this is due to the three Irish provinces being in the top four of the PRO14, while attendances at the four Welsh regions diminished in 2018/19.

More of a divide was noted in the estimated primary broadcast deals of the two competitions, where the Premiership’s annual £40million deal with BT Sport significantly outstripped that the PRO14’s yearly £20m-25m – excluding South African contribution – deal with Premier Sports.

Both leagues remain considerably behind the Top 14, however, with the French league’s deal worth £65m last season and set to rise to £88m for the current season albeit that is shared with the Pro D2. These figures do not include secondary broadcast deals the competitions have in place, such as the Premiership’s deal in China.

The differences in attendance figures and broadcast deals are reflected in the value of players in the competition, with the Premiership averaging a figure of £150,500 per player and the PRO14 at a mark of £126,500 per player. As a result, there has been a knock-on effect on the financial positions of those clubs.

Overall revenues in the Premiership were up by five per cent in 2018 to a total of £205m, although they still recorded operating losses of £36m across the league. By comparison, Top 14 revenue sat at around £300m and there were combined operating losses of £27m. Due to the array of different ownership and funding models in the PRO14, the report stated it was more difficult to compare their figures.

On to the playing squads and Esportif Intelligence found that PRO14 squads remained largely the same size between 2017/18 and 2018/19 while Premiership squads had increased on average from 41 senior players to 43 and from 13 academy players to 16. The number of players used in the season was also up, from 47 to 49. Leinster recorded the most players used across the two leagues with 57, followed by Munster with 54 and Bristol Bears with 53.

On average, Premiership clubs had three more academy players than the PRO14 teams last season, had an additional player signing senior terms from their academy and recruited 11 new players, rather than seven in the PRO14. The PRO14 sides did average a higher retention of players, though, with 32 compared to the Premiership’s 29.

Domestic player figures were high in the PRO14 with around 70 per cent of players on senior contracts being eligible for the nation they were playing in, a figure that jumped to 74 per cent in the top four side of the competition. In the Premiership, the number fell to 57 per cent.

Average Premiership spend on senior playing squad rose from £6.1m to £6.4m last season, while a mark of £5m in the PRO14 stayed steady from 2017/18 to 2018/19. In both competitions, the starting XV accounted for roughly 60 per cent of that total senior squad spend. The rise of £300k in squad spend in the Premiership represents a significant slowing in wage inflation following the jump from £5.2m (2016/17) to £6.1m (2017/18) when the Premiership increased its salary cap.

One factor consistent across both competitions is that the clubs within the top four more heavily rewarded their domestic players financially. In terms of starting XV spend, the Premiership clubs average 49 per cent on domestic players and 51 per cent on foreign players.

These numbers provide an insight into the financial and squad management processes behind the clubs in the top tier of home nations rugby. With the impact of CVC’s investment in both competitions yet to be fully felt, these figures could provide an important baseline moving forward.

If that stat is right: prem loses £36 and average spend on senior squad is £6.4 then the clubs are almost losing enough to pay the salaries of another 6 teams. I.e. half the league. Or the prem would still lose money if they paid less than Pro14 salary average.

There are serious questions about their financials.
Top
Post Reply
15 posts • Page 1 of 1